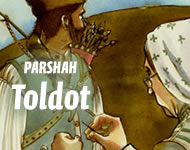 We have now entered a new stage in the book of Bereshit.  Avraham and Sarah have passed away, Yitzhak marries Rivkah, and after twenty years of prayer and longing, Rivkah gives birth to twin boys, Yaakov and Esav.  “The children agitated within her, and she said, ‘If so, why am I thus?’  And she went to inquire of Hashem.  And Hashem said to her: ‘Two nations are in your womb; two regimes from your insides shall be separated… The first one emerged red, entirely like a hairy mantle; so they named him Esav.  After that his brother emerged with his hand grasping on to the heel of Esav; so he called his name Yaakov…” (Chapter 25, verses 22-26)  As we see in this week’s parsha, Yaakov and Esav had very different character traits and their lives took very different paths.

Rebbe Noson writes that Yitzhak made a mistake with his son Esav when he saw that he was born with red hair, because he thought that the strong amount of blood inside of him, as expressed in his skin and hair color, meant that he possessed a lot of holy brazenness, like King David, who was also a redhead and a fierce warrior.  Yitzhak was fooled by his son Esav, about whom Rashi says that he would trap (people) with his mouth.  Esav tricked his father with questions like ‘how do you take tithes from straw?’ as if he was a Tsaddik who cared about the laws of the Torah (straw is not a food product which needs to be tithed before eating).  The Midrash on the parsha explains that Shmuel the prophet was also mistaken when he saw King David for the first time because of his red complexion; he said in fear ‘even he is a murderer like Esav!’  G-d replied to him, ‘with beautiful eyes.’  David also had tremendous power and courage like Esav, but he used these qualities to serve Hashem as the King of the Jewish people.  Rebbe Noson concludes that it is hard to distinguish between brazenness which is used against holiness, like Esav, and brazenness which is used for the sake of holiness, like King David.  Yitzhak was mistaken about who his son Esav really was, and Shmuel was mistaken when he first saw King David.  Esav and David possessed a similar quality of brazenness, but we see from their lives that they expressed it and used it in very different ways. (Likutei Halachot, Laws of Gifts, 5th teaching)

Emotions or character traits are not in and of themselves bad or good.  The question is how we express them, and how to find the proper balance if a character trait is being expressed in an unhealthy way.  For example, anger is bad when it causes us to scream at someone else and say hurtful words, G-d forbid; on the other hand this same (incorrect) expression of strength is also what helps us be assertive when needed, or to find the courage to overcome a negative desire which we know is bad for us.  Fear is negative when it prevents us from doing something which we know we need to do, or if we are afraid to speak with someone because we are afraid of their potential reaction; but it has a positive side which is cautiousness and fear of Heaven, being careful and sensitive of how we interact with others and how we fulfill Hashem’s commandments.  In contrast, love is usually thought of as an emotion which is only good, and something which most people feel they are lacking in their lives.  However, love can also be something negative when someone engages in physical desires, or develops an addiction, because they are mistakenly looking for real love in the wrong place.

Nobody has inside themselves any trait which is essentially bad.  Each person received exactly the strengths, talents, and also the life challenges and conditions which they need in order to do their special role in the world.  In G-d’s plan there are no mistakes.  It is our choice to look at ourselves and say, ‘okay, these are my talents and these are my faults, what can I do with them and where do I go from here?’  Through prayer, learning, and seeking advice we can learn to turn even those character traits and emotions which we have struggled with for a long time into something good and a blessing for ourselves and for others.