As long as we were distant, even if it was accepted and normal, without crossing any internal or social norms, without breaking clear red lines, we continued to carry our painful situation without fighting it.  However, when we fell, when we reached a place that we never dreamed of reaching, we were shocked. 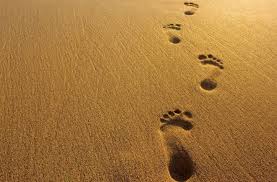 We all know to say and to quote that our generation is called ‘the footsteps of Moshiach[1]’.

What does it actually mean to be the generation at the footsteps?

How does is sound?  Like a compliment?  Encouraging?  Does it give hope?

The truth is yes it does.

Yes, to be a heel, small and short and lacking beauty, this specifically compliments and encourages and gives an endless amount of hope, because specifically ‘there Hashem is found’, and it’s not for nothing that the song “And even in the hiddenness”[2] has become in this generation one of the most popular songs…

That’s how it works, the lowest is the one who has the most potential to reach the highest, and behind the worst darkness is hidden the greatest light, and the most distancing impurity can cover up closeness and love.

And only with the help of this principle is it possible to understand how it’s possible that a partial blemish[3] on the body makes someone impure, while a skin blemish which spread on all of the body and covered it from the feet to the head specifically makes someone pure: “If the tzaraat will erupt on the skin, and the tzaraat will cover the entire skin of the affliction from his head to his feet, wherever the eyes of the Kohen can see… then he shall declare the affliction to be pure, having turned completely white, it is pure.” (Leviticus, 13:12-13)

How is it possible to understand this?

Rebbe Natan explains: “Even someone who is at the lowest level, absolutely lowly and small, even in the chambers of impurity, also there there is no limit and boundary to Hashem’s Godliness… because even in the lower levels, which are very low and very far, God forbid, there is no impurity or place which can prevent a person from finding Hashem there, because his Kingship is in every place, as it is explained… on the contrary, sometimes when a person is in a very, very low place and the evil inclination and impurity spread over him greatly and they want to swallow him completely, God forbid, then specifically Hashem has mercy on him and sends him purity and help from above so that he can revitalize himself and return to Hashem… because Hashem didn’t say to erase the name Israel… and this is alluded to in the mitzvah of skin impurities, that baheret[4] the size of a fingernail makes someone impure, and if it spread over all of him, he is pure, because sometimes specifically when a person reaches the absolute lowest level, there can be found the highest level of ascending, and purity and rectification are brought upon him.” (Likutei Halachot, laws of sending away the mother bird, 4th teaching)

‘At the absolute lowest levels’, also there there is no end to His Godliness.  He is also found there.  Watching over.  Present.  Bringing back to life.  And the most amazing- also there can be found the greatest mercy and most compassionate help in the world, and the most incredible ability to be saved from the jaws of impurity and return to Hashem.

Do we understand this?  Do we comprehend the secret and the message?

Like every teaching of Rebbe Nachman, this is relevant to us at all the levels and dimensions.

This speaks to us first of all in the spiritual aspect, if we’ve fallen deeply into darkness and we are very far from Hashem.  Much, much lower than yesterday and two days ago and the week before.  Low and small and completely distant.  We don’t remember any teaching of faith and we don’t have the strength to fulfill any mitzvah.  We’ve gotten completely lost.  Specifically from there, from this fatal spiritual darkness, a salvation is likely to sprout for us and a new path for growth is paved.  Because specifically there, in this complete darkness there is a great light of help from Heaven, which gives us life in this darkness.

This speaks to us also, of course, on the emotional level.  Many times we are dragging through life, and it’s difficult for us, and we don’t have strength.  Times goes by without any change or opening to escape.  Until a pain comes which wipes us out, and pushes us into the arms of salvation.

People can have, for example, a failed married life for forty years, not move a millimeter in the direction of change, be stuck on role playing, monotony, emptiness, loneliness and apathy.  Until- until a terrible argument breaks out the likes of which have never been seen, drenched with terrible expressions on both sides which never reached their lips all the days of their life.  They’re in shock.  They’re certain that this is the end, and from here they are on their way to the Rabbinical Court… but they don’t know that specifically here, especially, Hashem is found.  Specifically here, when the blemishes have spread over the whole body, from head to toe, a voice from Heaven declares ‘pure’.  Specifically in this situation they receive all of the help, wrapped in the greatest mercy, in order to go out on a new path.

It is also possible to explain how this works inside our souls.  As long as we were distant, even if it was accepted and normal, without crossing any internal or social norms, without breaking clear red lines, we continued to carry our painful situation without fighting it.  However, when we fell, when we reached a place that we never dreamed of reaching, we were shocked.  Our sense of survival receives such a blow that all that’s left for us is to react with a return punch and leap forth with a bang.  This is how it works regarding any emotional or spiritual crises: until you reach the breaking point and you scream in pain, there’s no point in talking about healing or change, because in the lowest depths there is incredible light, which has in it the power to lift us up to the highest level.

It is fitting for us to inscribe this principle in our hearts: if the blemishes are on the entire body- pure!  It doesn’t mean that from the outset we strive to get there, however if we’ve already fallen to a low place, if we’ve reached the end- the end of our strength, the end of our understanding, the end of our spirituality, the end of everything- there can be found the highest level of ascending, and purity and rectification are brought upon us, like never before.

[2] The lyrics are from one of Rebbe Nachman’s teachings

[4] A type of skin impurity