Things can change!  Yes, there is such a thing!  Prisoners can leave their jail cell, slaves can be freed and every Jew can leave behind what is holding him back.  Healing is something which happens instantly.  It can happen. 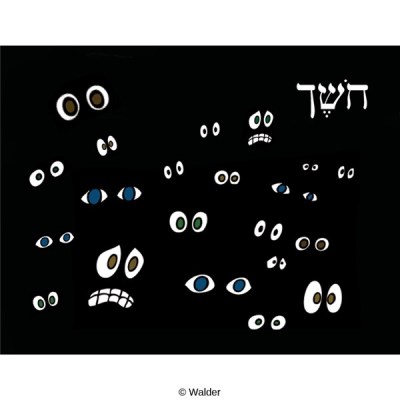 The scent of the redemption already fills the air, the news of freedom is spreading from person to person, the slavery is becoming weaker and weaker, the kingdom of Pharaoh is falling apart; shortly the Jewish people are leaving Egypt.

Who is a candidate for redemption?

However, a little bit before the good ending, comes the plague of darkness and with it four out of every five Jews died, who until then were slaves to Pharaoh…

Why?  Why did this happen to them?  How did this terrible tragedy happen, that eighty percent of the Jews died close to becoming free, while they were still in the work camps, without meriting to feel the taste of freedom?

This sounds crazy!  How could this be?  Who doesn’t want to leave after the difficult slavery and terrible suffering?!  Who?

Someone who believes that it has to be bad, someone who thinks that suffering and sorrow are an inseparable part of life, someone who is certain that only through endless difficult labor we will justify our existence, someone who is convinced by the darkness around him, someone who hugs what is constricting him- how is it possible to redeem a person like this?!

Despite the fact that this test was a long time ago and we are descents of those who merited to be redeemed, also in today’s reality the plague of darkness syndrome is still in control: a “problematic” external image which becomes an inseparable and silencing identity.

A problematic identity- is there such a thing?

A Jew comes to receive emotional help, it’s difficult for him, he has a lot of problems, sometimes he diagnoses himself and comes with a few ‘professional’ diagnoses for his difficult situation… sometimes he simply feels unsuccessful and weak, miserable and very problematic, the whole world is against him and nothing goes right for him, not in marriage and not in growing as a person and not in Judaism and not in self-realization… in any case, he wants to receive help.  He wants help with all of his being.  One of his hands is really outstretched with a request for help.

However, the second, hidden, hand is grasping tightly his bundle of problems, which nobody should dare to come close and rob from him his most precious possession.  This is how he is, problematic.  Like this and not something else.  Nobody should dare to take this from him.

Ask a person like this:  “But why?  Behold, you want help?  You know and feel that you need a change.  So why are you not willing to let go?”

The answer will be:  “About myself!  You don’t understand?!  That is who I am!  You can’t take me away from myself and leave me with nothing!  What, you want me to die?!  This is my identity, without it I don’t have anything!!”

He only knows this way of being and thinking to the point that he feels threatened by the idea of separating from it.  He is convinced that if someone will take away from him his “problematic” identity, they will remove from him his very self.

The problem of the slavery- something essential or external?

According to the truth, defining a person as ‘problematic’ is so incorrect!  Our problems are just external, and we don’t begin or end with our external identity.  Clothing (the external image) is just clothing, you can wear them and remove them according to the need and in an instant.  However what we really are is deep, internal and eternal.

Things can change!  Yes, there is such a thing!  Prisoners can leave their jail cell, slaves can be freed and every Jew can leave behind what is holding him back.  Interpersonal relationships which are stuck can be pushed forward.  The victim doesn’t have to remain a victim his whole life.  A controlling person doesn’t have to always remain controlling.  A depressed person can begin to be happy, a suspicious person can trust, a person under pressure can be released from it, and an overweight person can lose weight… healing is something which happens instantly.  It can happen.  However, how will it happen to a person who holds his sicknesses close to him like an oxygen mask and is sure that without them he will die?!

The most fundamental feeling in the soul is the feeling of “I”.  Our whole lives surround around ourselves.  What is the “I” composed of?

The “I” is made up of character attributes, desires, aspirations, dreams and opinions.  A person sees his opinions and viewpoints as part of himself.  Therefore, a fundamental change in one’s view means changing himself, foregoing the old self for the good of the new self.  This concession seems to us to be so difficult that it is impossible…

The Torah comes and tells every Jew: you can leave this!  You have a soul which can leave all the constraints.  Your problem is that you think your power is limited, and therefore you already don’t have a chance to leave this.  The splitting of the Red Sea exactly battles against this outlook.  Its purpose was to tear through the ‘sea’ of the finality, to tear apart the ‘sea’ of these terminal thoughts, because truly your strengths have no limit!  All of those who thought that their strengths had an end and it was decreed upon them eternal darkness- stayed in Egypt; they listened to Pharaoh, to his bad mouth.  However, the twenty percent who continued to believe in good also amongst the complete darkness, also amongst the forty nine levels of impurity, amongst the dirtiest place in the world, amongst the falsehood- they succeeded in leaving this reality and entering the forty nine levels of purity.

So what do we do?

Sentences like “that is my luck”, “that’s how I was born”, “I already tried everything”- they are a lie in the soul and display an incorrect connection to the problem, like a bear’s hug.  What is the truth?  That the whole horizon is open before you- from one end to the other.  Just hold out both of your hands and chose anew.

If we will rely on the desires of our heart, on our incorrect interpretations of reality, surely we will stay in Egypt.  The only way to leave is to believe in someone who was never enslaved, someone who was standing completely on the outside.  To believe and to follow him to the desert of miracles and wonders which awaits us outside of Egypt.  Moshe also asks us:  Why are you rolling around in the filth?  Why are you torn apart?  What holds you captive in the ‘bad’?  Stop being miserable while building “storage cities” for Pharaoh.  Nobody needs this.  Every morning a Jew blesses “who did not make me a slave.”  The slavery which you find yourself in is not a decree from heaven, it is just a deception of Pharaoh.  You are not really a slave.  Simply stop believing in it.  Leave Egypt!

[1] A major Rabbi of the Middle Ages, wrote a commentary on all of the Bible and Talmud