The Purpose of Ascent

It sounds like an affront to everything we know, why descend? What strange words- for completion we also need to go down? Descending is a merit? To only want to ascend is the evil inclination? Why? What is the secret that the Tsaddikim are revealing to us about ascending and descending? 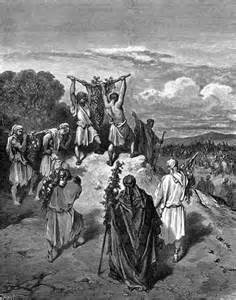 Since Hashem promised to our forefather, Avraham, in the covenant between the parts[1]: “For all of the land that you see, to you will I give it, and your descendants forever (Bereishit[2], Chapter 13, Verse 15)”… the children of Israel have gone through a lot. The descent to Egypt, the terrible slavery, the ten plagues, Moshe Rabeinu and the miraculous redemption, the splitting of the Red Sea, the giving of the Torah, the journey in the dry desert… and now, finally, the time has come, and the Jewish people are right before the entrance to the Promised Land.

Moshe Rabeinu sends spies, one person from each tribe, to explore the land of Israel which they will eventually enter- to see what it is like, what are its strengths and characteristics and who is settled there. After forty days of exploration in the Promised Land, the spies return to Moshe and they degrade it with their words to the entire nation, who are awaiting their entrance to the land of Israel. In one blow of despair and national destruction: “They spread an [evil] report about the land which they had scouted, telling the children of Israel, ‘The land we passed through to explore is a land that consumes its inhabitants, and all the people we saw in it are men of stature. There we saw the giants, the sons of Anak, descended from the giants. In our eyes, we seemed like grasshoppers, and so we were in their eyes.’ The entire community raised their voices and shouted, and the people wept on that night. (Bamidbar[3] Chapter 13, Verse 32-33, Chapter 14, Verse 1).” There are a lot of interpretations and explanations about the sin of the spies, what exactly their sin was and what brought them, important messengers and the elite of the nation, to sin like this. Rebbe Natan[4], like always, explains these occurrences in great depth, but even with all of their depth, they can still touch us and be relevant for us: “The spies said: ‘There we saw the giants, the sons of Anak, descended from the giants. In our eyes, we seemed like grasshoppers, and so we were in their eyes.’ That is to say, that disguised among them was the accusation of the angels who said ‘what is a human’, that from this comes the main evil inclination. Since the giants were sons of Shemachazi and Azael, who brought testimony against the creation of man, Hashem brought them down since with their words they did a lot of damage. The defect of the spies came due to these accusers, who did not want to lower themselves to the aspects of faith and to join by way of this all of the worlds together, which is the aspect of the land of Israel. Because it seemed to them that it wasn’t relevant for Hashem to receive joy from the lower levels… and they fell from the true faith that Hashem gets pleasure and satisfaction from human beings specifically, even from the lowest ones (Lekutei Halachot[5], Yoreh Deah- Hilchot Nedarim- Halacha 5, Paragraph 12-19).”  The sin of the spies was that they didn’t agree to lower themselves. They didn’t believe that there was a purpose for low levels. They didn’t agree to fall; they only wanted to rise, to always be ascending. And the land of Israel- which is the aspect of connecting the lofty and the lowly, to join heaven and earth- did not fit them. In their opinion, there was only supreme, and their desire was to reach the heavens only. Leave them alone concerning the land of Israel. Everyone recognizes the will that pulsates throughout humanity- especially those of the 21st century- to rise, to go higher, to succeed, and to get to the peak. In our words- to be a true servant of Hashem, exact, pure, one that never despairs and conquers battles and continues to fight with all their strength and does not surrender from any battle without a flag of heavenly victory in his pocket… and this is only talking about spiritual goals, when we are sure that it is a holy desire.

What, it’s not true? They revealed to me Hashem, they revealed to me his commandments, what it’s not clear that now I’m supposed to go up, always to rise, to climb and to skip on the mountain of Hashem? I want to ascend! I don’t want to descend! Who wants to descend? And when I go down it hurts me.   It frustrates me. I feel guilty and that I am not ok. Get out of here, loser! We only need to go up! The decline is a mistake! It is a terrible error! How dare you descend? If you were strong enough and talented enough and righteous enough, if you really wanted, if you really cared and you made a great effort like you were supposed to- of course you would have found a way to skip over these failures and continue to climb higher on the mountain of Hashem! It’s clear, isn’t it? It’s the truth, right? No! Because just as one needs to ascend, one also needs to descend! “…as Rebbe Nachman[6] wrote, may his memory be a blessing, in Torah 62[7], that there is a strong evil inclination in the matter of coming close to Hashem, the aspect of ‘lest they break through to Hashem to see…to ascend (Shemot[8] Chapter 19, Verse 21)’ that is to say one desires only to come close to Hashem and to ascend always in an upward movement without a break. He does not want to lower himself at all to the lower levels, to serve Hashem in purity and to elevate and to draw near all of the lower levels to Hashem, because it seems to him that he is already close to Hashem. But in truth this is a terrible deficiency, because in truth there is no completeness to any Tsaddik, as big as he is, when he is only above and not below at all, as it is explained in Torah 7 (Likutei Mohoran[9] II) that the principle completion of a Tsaddik is that he is above and below… because this was the essential fault of the spies that damaged the land of Israel, which is where one merits this aspect for the purpose of completion, to merit complete faith, until one merits every time to lower himself to all of the levels, even the lowest, and to raise them and to draw them closer to Hashem (Likutei Halachot[10], Yoreh Deah- Hilchot Nedarim- Halacha 5, Paragraph 12-19).” It sounds like an affront to everything we know, to our outlook and to our stance regarding failures, on everything we were educated about from when we were very young. Why descend? What weird words- completion is also to be below? The descent is a merit? Only to want to ascend is an evil inclination? Why? What is this secret that the Tsaddikim are revealing to us about ascents and descents?

There is a purpose to this world, and the purpose of the world is not for a person to fly in the heavens with the wings of angels and to receive medals, rather the purpose is to connect the entire world, in its diversity, to Hashem.   In this world there is a lot of pain and a lot of black and a lot of evil and failures and descents and defeats, and every person is waiting for their rectification. In everyone there are sparks that are awaiting you, for you to raise them up, and how will you raise these sparks from down below, if you are only up above? Do you understand? You also have to descend. This is what Hashem desires. That we will go up and down! The descent is not a mistake; it is part of the purpose! Like our Rebbe says “The purpose of ascent is descent.” The purpose of ascent is so that we can merit going lower and from there we can pull out very rare treasures and raise them up. So the next time you fall, in whatever situation, in your eating restrictions, or in your daily hour of personal prayer, or from joy, or from will, or from trust or from faith…along with the pain and the prayer and the desire to ascend and start anew, remember that you now merit with your descent to bring closer and to elevate other souls who are like distant diamonds, from the depths- to Hashem. All my praise!

[1] The covenant between the parts (Hebrew: ברית בין הבתרים berith bayin hebatrim) was an important event in the biblical story of the forefather Avraham. In this event G-d revealed himself to Avraham and made a covenant with him (at the site known nowadays as Mount Betarim), in which God announced to Abraham that his descendants would eventually inherit the land of Israel. This was the first of a series of covenants made between God and the Patriarchs.

[5] Rebbe Natan’s explanation of the Shulchan Aruch (Code of Jewish Law), based upon Rebbe Nachman’s teachings

[10] Rebbe Natan’s explanation of the Shulchan Aruch (Code of Jewish Law), based upon Rebbe Nachman’s teachings

One thought on “Parashat Shelach”